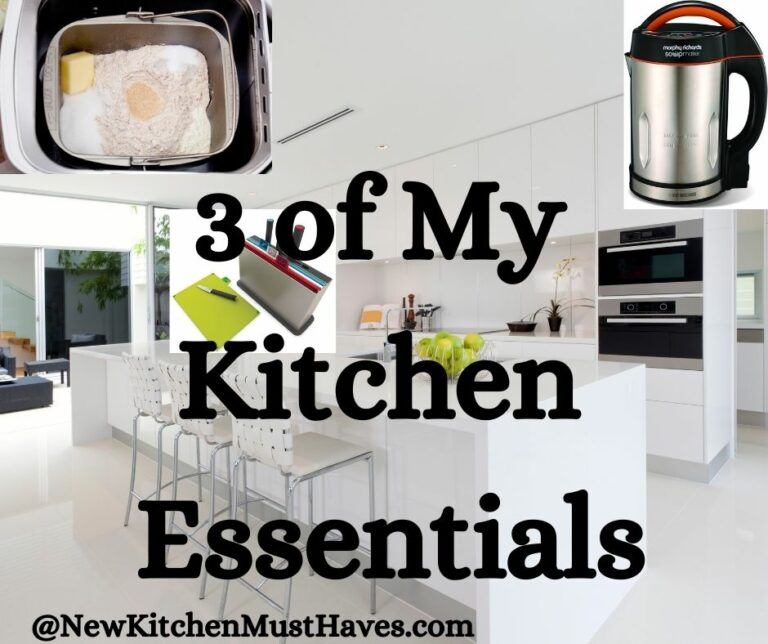 I have many essentials in my kitchen of course but doing the previous post about ‘the kitchen being the heart of a home’ 3 sprung to mind immediately. So I decided to let you know about 3 of my kitchen essentials.

I had started to add them to that post but realised it was going to get so long that you would be bored and probably falling asleep. 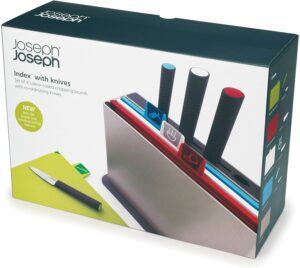 My chopping boards are used a few times a day at least. I don’t know how I managed without them. I wonder if that’s why my kitchen worktops are scarred? Let’s not dwell on that now. Moving swiftly on……

They appeared in my life as a gift, sort of.

Just before hubby retired he was given a gift book and told to use points up to a certain amount. Cannot recall now what that was as it was a few years back. Anyway …. he flicked through and then lost interest, said get what you like. So I got a Joseph Joseph set of chopping boards with the knives to go with each board slotted in the top

What else I got with those points!

Besides the chopping boards, I got an Air fryer, a Breadmaker, and a Spiraliser and hubby had a very big telescope.

At the time my younger daughter had a spiraliser that she used a lot, which is why I went for that one. Except this was electric and less work than her hand one. Mind you when I bought it for her, they were a very new thing and all seemed to wind by hand. Plus that was the particular one she wanted at that time.

I got the Airfryer because I had had a hankering for one because of the health benefits and time saving. I confess that I haven’t used the Airfryer very much. I had a few months where I used it more but then forgot about it. Considering it sits on a worktop and is quite largeish its surprising it doesn’t get more use really.

The breadmaker was because I had got out of the habit of making bread and decided it would be quick and easy.

The breadmaker takes time to make a loaf of course, the dough has to be mixed and kneaded, then left to rise and kneaded again before another rise and being cooked. The thing is that the breadmaker is doing the whole thing. All you have to do is pour in the ingredients at the start. Result!

I resisted for a long time, making soups the usual way. Big pot on the stove left to simmer, then blended it all because I prefer smooth soups, then back in the pan again. It was a bit of an effort but I would make several days worth. 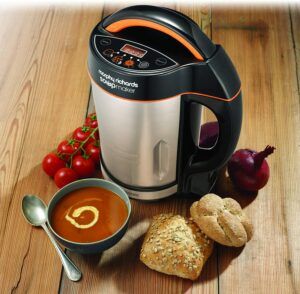 Then my brother bought me a large soup maker one christmas. I resisted, it sat there for months. I was sure it wouldn’t be the same or taste as good. Summer passed, winter rolled in and finally out came the soup maker.

Mine is the same make as the one opposite.

This one also comes with a 2 year guarantee.

It makes soup making so quick and easy.

I was amazed how simple it was. Just peel and chop the veggies etc put them in and add the stock. I use the small Knorr ones then add liquid up to the level given. Takes a fraction of the time and I still make several days worth. It keeps well in the fridge or you can freeze it in portions.

I don’t add meat to mine, if you do then you should probably freeze any more than a couple of days worth. When it includes meat also make sure to reheat thoroughly too.

My soup maker is still going strong for now despite the constant use for at least 6 months of each year. I love having different soups for my lunch, though a strong favourite is butternut squash with peppers.

The funny thing is that I rarely had soup before I got the urge to cook up batches and if I did, it was always Heinz Tomato Soup. Now I have even more variety over the last few years with my soup maker. If it wore out, I would have to buy another one. I could not go back to the lengthy process of cooking up a batch on the stove.

I have to say that I love my bread maker for two reasons.  The first is the absolutely gorgeous taste of fresh bread still warm, freshly cooked, mmmm. The second reason is the divine smell that fills the house.

You can add the basic ingredients to your bread maker or you can get ready made mixes that you just empty in and add water. They contain just the basics, no nasty additives. If you are in a rush or have run out of yeast or flour, they are quick and simple to use. I still make rolls by hand or ciabatta loaves or occasionally I like to make bread plaits. They are great to tear off and butter.

The breadmaker in the picture, is similar to mine but newer.

If I am making a few different types of bread for a get together, the plain white will go in the bread maker and the others will be made by hand.

I didn’t think it would get as much use as it has but it has been used endlessly over the last few years since I go it.

I am not a great bread eater, especially of bought bread but if I do eat any, it will be a piece of freshly made bread.

What do you think?

Do you approve of my choice of 3 of my kitchen essentials? What are your 3 essentials you couldn’t manage without?

Do you have a particular kitchen appliance that you yearn for?

I would absolutely love one of those big double fronted fridge freezers that you can plumb in to have ice and chilled water ready whenever its needed. I have quite a large fridge but not as much space as those big ones have. My fridge is about 25 years old now, still working well but just in case I have kept looking for one that’s similar in size. Unfortunately they seem to be a thing of the past, so I may have to get one of the big ones yet. My fridge I have now is so crammed at times that there is no way I can go smaller.

6 thoughts on “3 of My Kitchen Essentials”